These are the recipes that I’ve tried from other bloggers/websites that I haven’t altered that we’ve really enjoyed for the month of December. It’s nice to recommend others plus it’s also encouraging to know the recipe didn’t just work for the person posting it but for others too (I’ve tried so many recipes that just simply haven’t worked). 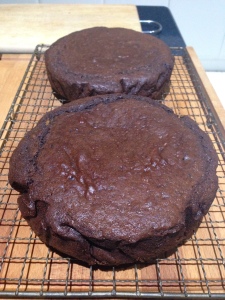 We had some yoghurt that needed to be used up and Kel’s Dad is always asking why i never make chocolate cake. I realised that i don’t tend to make anything that i actually feel like, it’s always because there is something that “needs to be used up”! I thought if i could make a chocolate cake with yoghurt, then i’d be hitting two birds with one stone. This recipe was super quick and easy and was exactly what i was after. I doubled the recipe and made two delicious cakes.

I still had a lot of leftover yoghurt plus some homemade crabapple jelly that we had from someone in the fridge. I wondered whether there was a recipe that combined the two – and there is! I tripled the recipe and made three cakes, two of which i froze. The cakes were a big hit! As you can see though, i didn’t bother with the Bundt tin 😉

Our dream is to live self sufficiently on our own land; rearing our own animals for meat, dairy and eggs, growing all of our own fruit and vegetables and providing a place for people needing regeneration and a new lease on life.

With this dream in our hearts and the start of our adventure upon us, we have decided to record it all through videos, pictures and words on this blog.